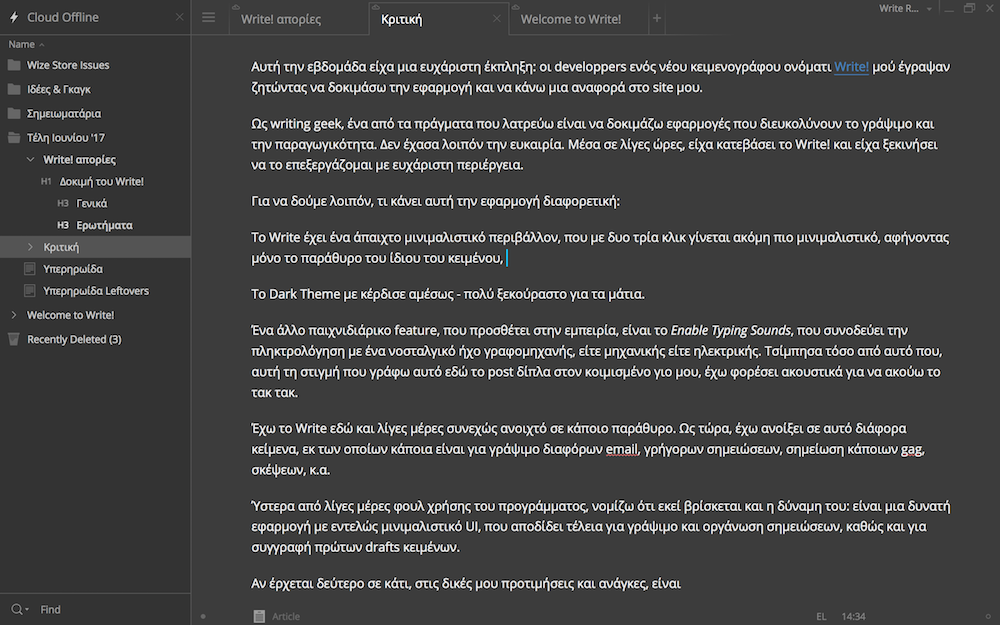 This week, I had a pleasant surprise: the developpers of a new writing app called Write! contacted me and asked me to try the app out and mention it on my website. My site doesn’t regularly host reviews, even less of apps, but, being a writing geek, one of the things I love is to try out new apps that aim to ease the writing process and productivity in general. Thus, I did not hesitate at all. In a few hours, I had already downloaded Write! and started exploring it with merry curiosity. So, what makes this app different to other writing software?

From my point of view, the app’s goal is to give the writer a distraction-free experience, as well as a powerful tool for organising her notes and documents. Let us see how this is achieved:

Write! offers a uniquely minimalistic user experience. Using the least of information, it gives the option of using Tabs (one for each open document), Folders (for grouping documents), and Sessions (a way of opening an ensemble of prechosen documents from various folders). By choosing the Full Screen mode, the environment becomes even more spartan, with only the text window visible, while the tabs discreetly slide off-screen. With two tiny (I mean tiny) round buttons, the user controls the appearance and disappearance of the two elegant sidebars, resulting if needed to a screen that shows the document’s text only. If this is not distraction-free, I don’t know what is.

Why not add to the positive elements of the user experience the Dark Theme, a soothing grey much more relaxing to the eyes than the classic white – I was instantly hooked – as well as the option to Enable Typing Sounds, that accompanies the typing with nostalgic typewriter sounds, either mechanical or electric. The latter is obviously more playful than useful feature, but I have to admit that since I discovered it I keep it on constatly. (Even at this moment, writing this post next to my sleeping son, I have put on my earphones so that I don’t miss the tac tac sounds!)

The app allows saving documents on the hard drive, as well as on Write’s own cloud. For local management, the files are saved as various formats, with the principal one being that of the app itself (.wtt), while one has more options with Export. For the time being, I have been saving exclusively on the app’s cloud, without any problems.

Write! comes with an embedded spell check tool for several languages, including Greek – which obviously interests me particularly.

Since I downloaded it, I keep Write! open constantly on some window of my laptop. Until now, I have started using it for various documents, some for composing emails, quick notes, gags, thoughts, as well as the synopsis of a feature film. During the few days of its intensive use, I did not attempt to start a more grandiose project than the above (eg. a… novel?). Nevertheless, my impression is that the app’s power lies on writing and organising notes, as well as writing first drafts of medium-sized projects. The reason for this impression comes from the fact that Write! is a linear writing tool. Yes, it organises its files in an excellent way, but the file is still the smallest unit used by the app. Thus, if a file augments in word count, it makes it very easy for the writer to get lost in the text, as much as in a Word document. For larger projects, I still consider a non-linear writing app as an essential (like Scrivener, which gives the ability to break down the text in as little and as many bits as desired – I often feel like breaking a scene down into beats – and it saves each project as a bundle with all the accompanying elements packed within, be they text or images). Of course, this strays the conversation towards a very different kind of app – and obviously not a distraction-free one, since Scrivener’s menus admittedly require a strong stomach. On the contrary, Write’s developpers aim to offer a combination of abilities and a cosy and simple environment, creating an app that inspires more dionysian writing storms than meticulous editing. And they achieve it a hundred per cent. 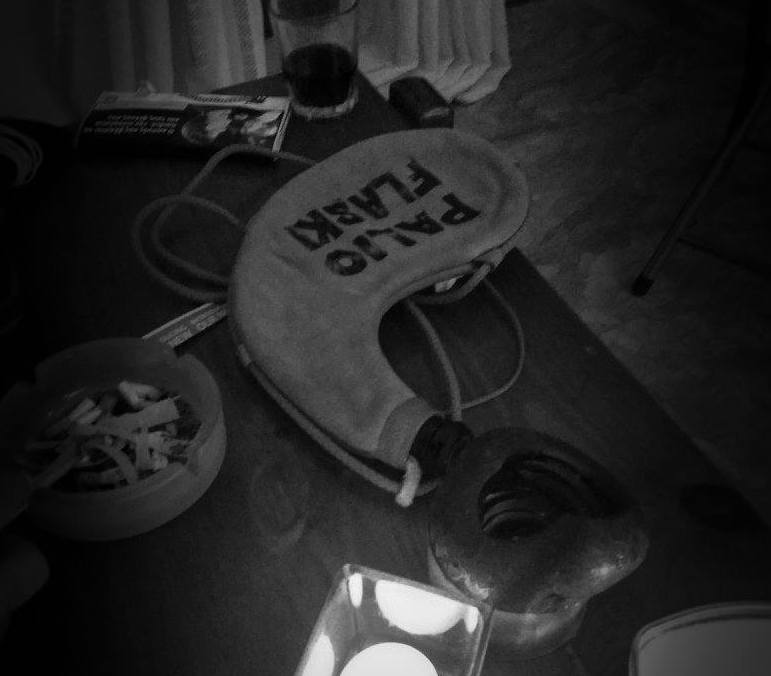